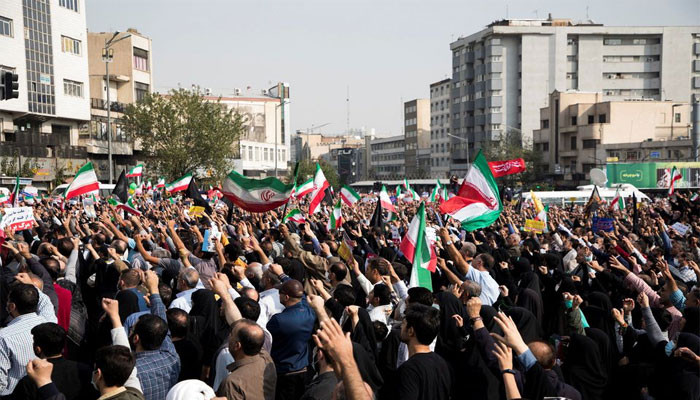 PARIS: Iran is one of the world’s most sanctioned countries, with Western powers over the past four decades using a punishing array of measures in a bid to push change.

On Tuesday, Tehran said it would respond to the latest sanctions imposed by the European Union (EU) and Britain over the handling of months-long protests triggered by the death in custody of Mahsa Amini.

Here is a timeline of the sanctions imposed:

In November 1979, Iranian revolutionary students stun the world when they storm the US embassy in Tehran and take 52 people, hostage.

In 1980, midway through the 444-day-long crisis, Washington breaks off diplomatic relations with Iran and imposes restrictions on commerce and travel.

In 1983, the United States is left reeling after 241 Marines are killed in a suicide truck bombing in the Lebanese capital Beirut. Minutes later, a second bombing kills 58 French troops.

In 1984, the United States blacklists Iran as a “state sponsor of terror” over its suspected role in the attacks.

Three years later, in 1987, then US president Ronald Reagan bans all Iranian imports and curbed some US exports to the country, over attacks on American vessels in the Gulf.

In 1995, US president Bill Clinton orders a total trade and financial embargo on Iran, accusing it of backing terrorism.

Foreign companies who invest in Iran’s oil sector are targeted.

In 2002, US president George W Bush puts Iran on his list of countries on the “axis of evil” supporting terrorism.

Between 2006 and 2010, the UN adopts four rounds of economic and trade sanctions against entities linked to Iran’s nuclear and ballistic programmes and freezes their assets.

In 2008, Washington bans American banks from serving as intermediaries in the transfer of funds with Iran.

Iran, which has always denied any ambition to develop an atomic bomb, is also placed under an arms embargo and loans to Tehran are restricted.

Between 2010 and 2012, retaliatory measures are announced against foreign groups investing in Iran’s vital oil sector, and the automobile industry is also targeted.

The EU bans technical assistance or the transfer of oil technology to Iran, imposes an oil embargo and freezes hundreds of assets including those of Iran’s central bank.

The historic deal reached by world powers in 2015 over Iran’s nuclear programme provides for a progressive lifting of the nuclear-related sanctions imposed since 2006.

In 2018, then US president Donald Trump walks away from the deal.

Trump reimposes sanctions on Iran and companies with ties to it, hitting the central bank and oil sector as part of a tactic of “maximum pressure” on Washington´s arch-foe.

After US President Joe Biden’s election in 2021, Washington begins indirect EU-mediated talks with Iran in Vienna, in a bid to revive the nuclear agreement.

Washington and Brussels impose new sanctions following Iran’s brutal crackdown on the mass women-led protests that erupted after the September 16, 2022 death of Mahsa Amini following her arrest by the notorious morality police.

On January 23, 2023, the EU targets several leaders of the Revolutionary Guards in its fourth round of sanctions over the repression.