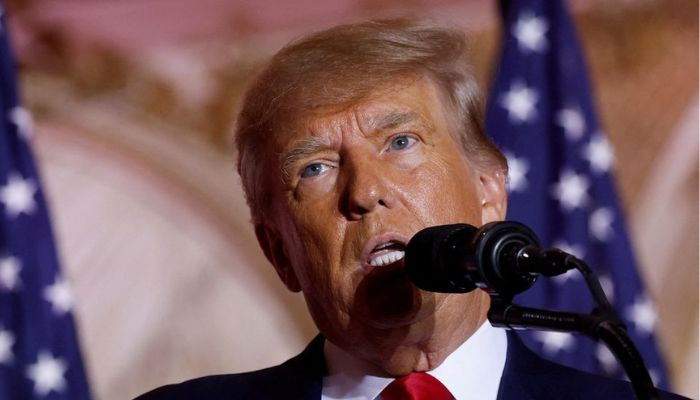 WASHINGTON: A US House of Representatives committee voted on Tuesday to release partially redacted tax filings from former President Donald Trump and said tax authorities had failed to properly scrutinize his returns while he was in office.

The House Ways and Means Committee voted to release a summary of Trump’s tax returns between 2015 and 2021, the years when he was running for president and serving in the White House, panel members said.

That could lead to more unwelcome scrutiny for the former president as he mounts another White House bid.

But the committee also said the US Internal Revenue Service did not follow its own rules when it failed to audit Trump’s tax returns during three of his four years in office. Members said Congress should pass a law to strengthen the presidential audit program.

“What people will likely be surprised about is the extent to which the IRS was not conforming to their own rules,” Democratic Representative Dan Kildee told reporters.

The IRS did not immediately respond to a request for comment.

Committee chairman Richard Neal, a Democrat, said a redacted summary of Trump’s tax returns would be released within days. Democrats have little time to act, as Republicans are due to take control of the House in January.

It was not clear whether the material would shed light on potential conflicts between Trump’s real-estate holdings and his actions as president, or how much tax he paid on the hundreds of millions of dollars his businesses earned while he was president. Lawmakers said the returns were scant on details.

“I think you’ll be surprised by how little there is,” Democratic Representative Lloyd Doggett told CNN.

Kevin Brady, the panel’s top Republican, told reporters that some of those returns were still being audited, so it was not clear how much tax Trump owed. Like other committee Republicans, he voted against their release on the grounds that it could set a bad precedent.

Two reports will be released later on Tuesday night, committee members said, one from the committee itself and one from the Joint Committee on Taxation, a nonpartisan body that analyzes impacts of tax provisions in legislation. They will include a memo from Neal on the purpose of the original request for Trump’s tax returns, the audit notes and proposals for legislation to codify the presidential audit program into law, committee members said on Tuesday night.

Trump, unlike previous presidential candidates, refused to make his tax returns public as he sought to keep secret the details of his wealth and the activities of his real estate company, the Trump Organisation, and he fought Democrats’ efforts to get access to them.

Trump has said that he cannot release his tax returns because they were being examined by the IRS. Tax experts have said that is not a valid excuse.

Neal declined to comment on whether Trump was being truthful or not.

Candidates are not required by law to release their tax returns, but previous presidential hopefuls of both parties have voluntarily done so for several decades.

Democrats on the committee said they need to see those records to assess whether the Internal Revenue Service is properly auditing presidential tax returns, and to gauge whether new legislation is needed.

Another House committee on Monday asked federal prosecutors to prosecute Trump for sparking the deadly Capitol attack on Jan. 6, 2021. Republicans are expected to dissolve or redirect that panel when they take control of the chamber.

Trump, who served as president from 2017 to 2021, reported heavy losses from his business enterprises over several years to offset hundreds of millions of dollars in income, according to news media reporting and trial testimony about his finances. That allowed him to pay very little in taxes.

The Trump Organisation was found guilty on Dec. 6 in New York of carrying out a 15-year criminal scheme to defraud tax authorities. The company faces up to $1.6 million in fines, though Trump himself is not personally liable. He has said the case was politically motivated and the company plans to appeal.

He also faces a separate fraud suit in New York that accuses him of artificially inflating the value of his assets.

During his presidency, he faced persistent questions about conflicts of interest, as foreign dignitaries and Republican Party officials spent money in his luxury hotels.