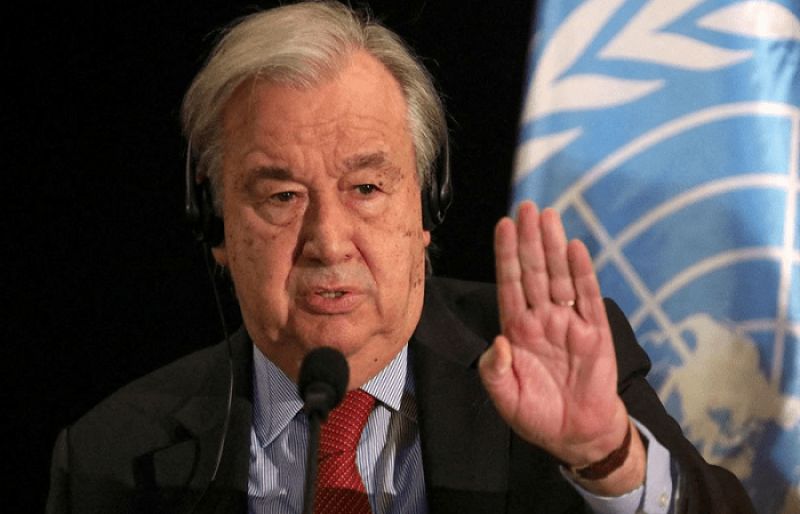 United Nations Secretary-General Antonio Guterres has called on the Taliban administration in Kabul to ensure an end to “all forms of terrorism activities” that posed a threat to Pakistan and other neighbouring countries from Afghan soil.

“There is […] a clear ask from the international community, which is for Afghanistan to stop all forms of activity of terrorist organisations that from Afghanistan represent a threat to neighbouring countries, including Pakistan,” he said while speaking at a UN press briefing in New York on Monday.

He also said that “we are actively engaged in our discussions with the Taliban de facto authorities in relation to this”.

“We consider that it is absolutely essential for the Taliban not to allow any form of terrorist activity that might have an impact in relation to Pakistan, as in relation to any other country of the region,” he added.

The UN chief’s statement was in response to a question by a correspondent from Pakistan’s state-run news agency APP about what he described as the Afghan rulers’ failure to prevent cross-border attacks in Pakistan by the militant Tehreek-i-Taliban Pakistan (TTP) and other terrorist organisations.

In this connection, he particularly mentioned an attack by terrorists on a police station in Khyber Pakhtunkhwa’s Lakki Marwat on Sunday that left four policemen dead and several others injured.

Hours after the attack, militants detained at a facility run by Khyber Pakhtun­khwa police’s Counter Terrorism Department in Bannu took over the compound, held interrogators hostage and demanded a safe passage first to Afghanistan and later to North Waziristan or South Waziristan.

The TTP has claimed responsibility for the attack.

As of today morning, reports said the situation in Bannu remained tense and the facility under the militants’ control with no breakthrough in talks for the hostages’ release.

These episodes are just two incidents among several others that signify the bigger issue of a rise in terrorism and the deteriorating situation of peace in the country, particularly KP, following the end of a ceasefire between the government and TTP in late November.

The UN chief said the Afghan Taliban must deliver in relation to the inclusion in the power structures in Afghanistan.

Moreover, he continued, “A second aspect in relation to human rights, in particular women and girls’ rights, the right of women to work, the right of girls to attend school at all levels without discrimination.”

Guterres was also asked to elaborate on how the UN intended to mobilise support for post-flood reconstruction in Pakistan at an international conference in Geneva on January 9.

He said in response that he was “totally committed to do everything possible to mobilise the international community to support Pakistan”.

He recalled he had visited Pakistan immediately after the floods and was “dramatically impressed by what I’ve seen, three times the area of my own country flooded, terrible loss of crops and of animals and of houses and of life, for the population of Sindh and Balochistan and absolutely devastating situation”.

“I believe the international community has a strong responsibility to support Pakistan which has contributed in a very minimal way to climate change.

“There is a huge responsibility of the international community to support Pakistan in relation to the conference that we’ll have [on] January 9 … to fully mobilise the resources that are needed,” he stressed.

Guterres said he was also in contact with the International Monetary Fund and the World Bank.

“There, hopefully, will be also, from these two institutions, meaningful action. And the Pakistani people deserve and need a strong expression of international solidarity,” he emphasised.