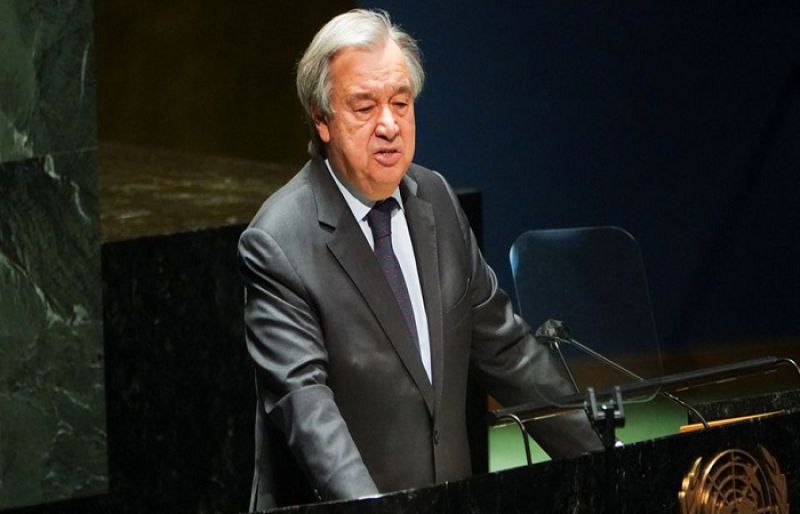 United Nations Secretary-General (UNSG) Antonio Guterres has urged the interim Afghanistan government not to allow terrorist organisations to use Afghan soil to carry out attacks on Pakistan and called on the International Monetary Fund (IMF), World Bank, and the international community to support Pakistan in dealing with the extended devastation of the unusual floods.

Addressing a year-end press conference at UN Headquarters in New York, Guterres said the UN is holding talks with the interim authorities in Afghanistan.

The UNSG also urged IMF, World Bank, and the international community to support Pakistan in dealing with the aftermath of the floods that wreaked Havoc in the country in July-September.

Talking about his expectations from the Geneva conference on January 9 aimed at rallying support for the flood-hit country for rehabilitation work, the UNSG said Pakistan needs strong support as one-third of the country was under water.

The secretary-general will co-host the Geneva conference with Prime Minister Shehbaz Sharif.

Guterres said he is in contact with the IMF and World Bank and hoped these organisations would take noteworthy efforts to support Pakistan.

The UN chief said Pakistani people deserve and need a strong expression of international solidarity as floods affected 33 million and killed over 1700 people.

UNSG’s visit to Pakistan
Back in September, the UNSG paid a two-day solidarity visit to Pakistan amid devastating floods. He visited flood-affected areas and stressed the need for developed nations to assist Pakistan, saying that the international body’s help is “a drop in the ocean” compared to what is needed to rebuild.

During his visit to the flood-affected areas and camps under scorching heat, the UN secretary-general was overwhelmed by the scale of devastation that has engulfed Pakistan, PM Shehbaz told.

He maintained that the UN chief’s voice has become the voice of flood victims.

Stressing the need for international support to deal with the natural catastrophe and control over carbon emissions, the prime minister said that the world should pay heed to what he said about climate change.