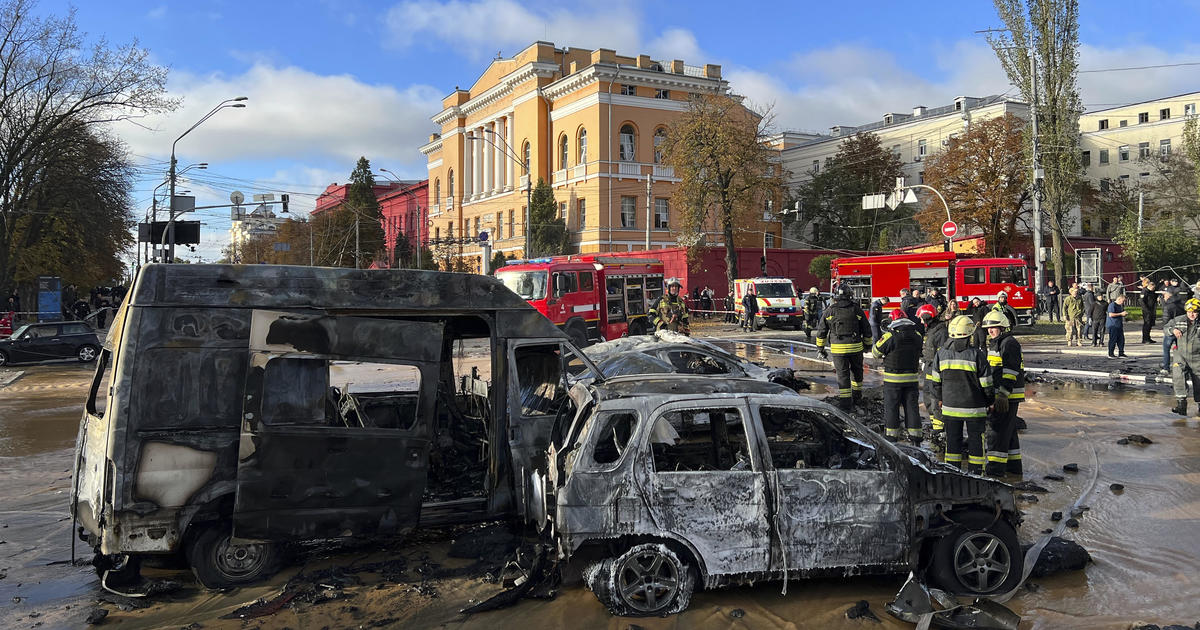 
A series of loud explosions rocked Kyiv Monday morning, a day after Russian President Putin blamed Ukraine for a deadly blast on the bridge linking Crimea to Russia. The blasts broke months of relative calm in the Ukrainian capital.

Monday’s attacks hit the center of the city. Previous attacks targeted Kyiv’s outskirts for the most part.

Associated Press journalists also reported hearing explosions in the city of Dnipro Monday morning. And Ukrainian media reported explosions in a number of other cities, including Lviv, in the country’s west. It’s been a refuge for many people fleeing the fighting in the east.

Associated Press journalists also reported hearing explosions in the center of Dnipro city Monday morning. And Ukrainian media reported explosions in a number of other spots, including the western city of Lviv that has been a refuge for many people fleeing the fighting in the east.

At least three explosions were heard in Kyiv around 8:15 a.m. local time, followed by at least two more. An Agence France-Presse journalist in the city saw numerous ambulances appearing to head toward the scenes of the blasts.

“Several explosions in the Shevchenkivskyi district — in the centre of the capital,” Kyiv mayor Vitali Klitschko said on social media.

The explosions came a day after Putin said Ukraine was behind an explosion on a bridge linking Crimea to Russia, leaving three people dead.

“The authors, perpetrators and sponsors are the Ukrainian secret services,” Putin said of Saturday’s Crimea bridge bombing, which he described as a “terrorist act.”

Putin was speaking during a meeting with the head of the investigation committee he has set up to look into the bombing, Russian news agencies reported.

The Russian leader was gearing up for a meeting with his Security Council later Monday, the Kremlin told local news agencies.

“Tomorrow the president has a planned meeting with the permanent members of the Security Council,” Kremlin spokesman Dmitry Peskov said.

The blast that hit the bridge sparked celebrations from Ukrainians and others on social media.

But Ukrainian President Volodymyr Zelensky, in his nightly address on Saturday, didn’t directly mention the incident, and officials in Kyiv have made no direct claim of responsibility.

On Saturday, Russia said some road and rail traffic had resumed over the strategic link, a symbol of the Kremlin’s 2014 annexation of Crimea.

The 12-mile bridge is a vital supply link between Russia and the annexed Crimean peninsula.

Some military analysts argue that the blast could have a major impact if Moscow sees the need to shift already hard-pressed troops to Crimea from other regions — or if it prompts a rush by residents to leave.

Mick Ryan, a retired Australian senior officer now with the Center for Strategic and International Studies in Washington, said even if Kyiv wasn’t behind the blast, it constituted “a massive influence operation win for Ukraine.

“It is a demonstration to Russians, and the rest of the world, that Russia’s military cannot protect any of the provinces it recently annexed,” he said on Twitter.

Zelensky, meanwhile, denounced a Russian missile strike on Sunday that killed at least 13 people, one of them a child, in Zaporizhzhia — the latest deadly bombardment of the southern Ukrainian city.

The attack also wounded 89 people, including 11 children, according to a statement from the president’s office.

Zelensky described the “merciless strikes on peaceful people” and residential buildings as “absolute evil” perpetrated by “savages and terrorists.”

Regional official Oleksandr Starukh posted pictures of heavily damaged apartment blocks on Telegram and said a rescue operation had been launched to find victims under the rubble.

Russian officials meanwhile denounced on Sunday what they said was a surge in Ukrainian fire into its territory that had hit homes, administrative buildings and a monastery.

Russia’s FBS, which is responsible for border security, said on Sunday: “Since the start of October, the number of attacks from Ukrainian armed formations on Russia’s border territory has considerably increased.”

More than 100 artillery attacks, concentrated on the western border regions of Belgorod, Bryansk and Kursk, had hit housing and administrative buildings, said the statement.

The attacks had killed one person and wounded five others.