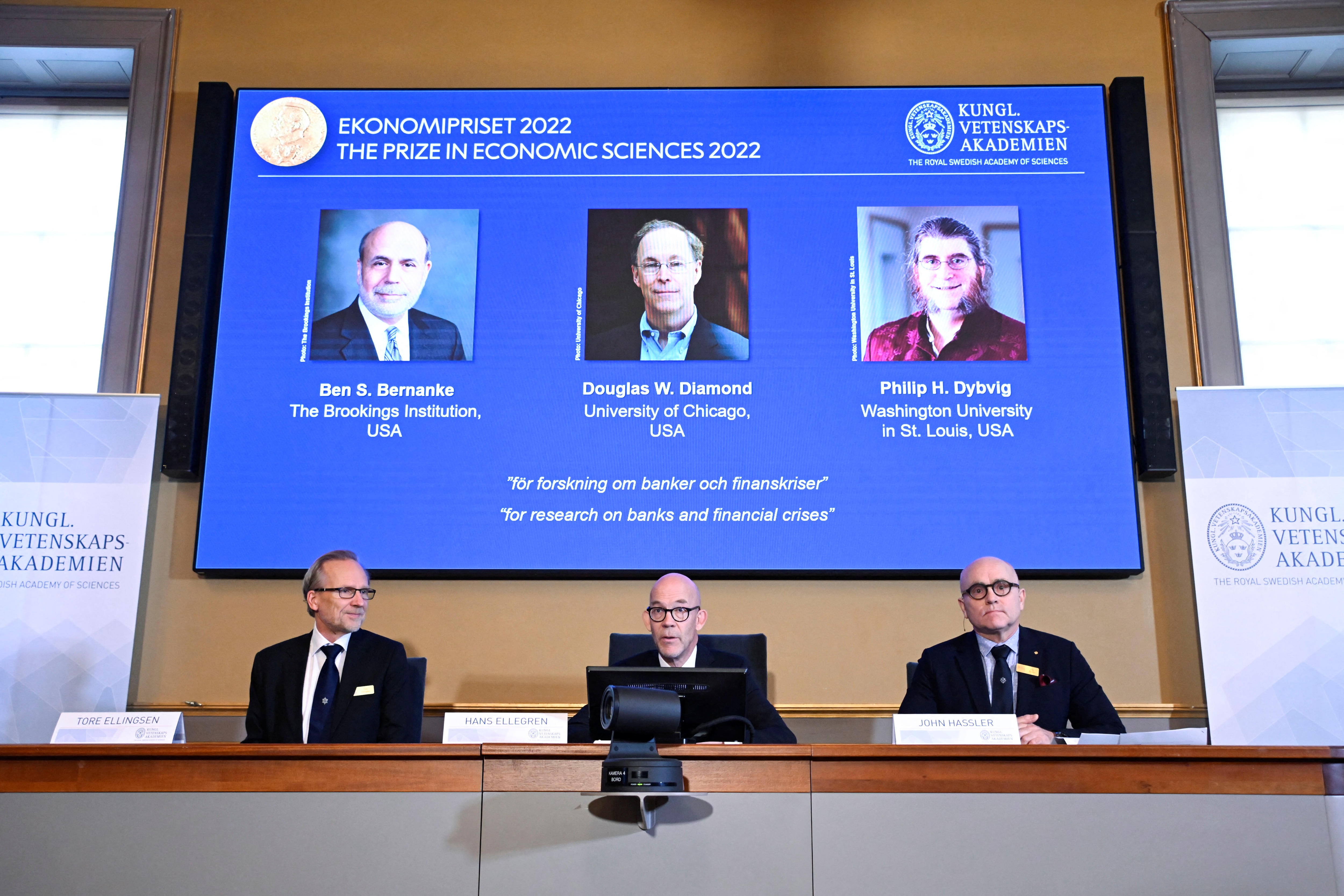 A trio of US economists including Former Federal Reserve chief Ben Bernanke won this year’s Nobel Economics Prize on Monday for laying the foundation of how the world now manages global crises like the recent pandemic or the Great Recession of 2008.

The trio, who also include Douglas Diamond and Philip Dybvig, won for their research on how regulating the financial sector and propping up failing banks can stave off an even deeper economic crisis, such as the Great Depression of the 1930s.

“The actions taken by central banks and financial regulators around the world in confronting two recent major crises – the Great Recession and the economic downturn that was generated by the COVID-19 pandemic – were in large part motivated by the laureates’ research,” the Swedish Academy said in announcing this year’s prize winners.

Governments around the world bailed out banks in 2008 and 2009, generating a torrent of criticism as ordinary consumers suffered with many losing their homes even as banks, a key culprit of the crisis, were saved.

But society on the whole benefited, the laureates’ research suggests.

“Even though these bailouts have problems, … they could actually be good for society,” Diamond told a news conference with the Swedish Academy, arguing that preventing the collapse of a financial firm like Lehman Brothers would have made the crisis less severe.

Ironically Bernanke was the chair of the US Federal Reserve at the time of Lehman’s collapse in 2008, which became one of the main catalysts of the world’s biggest financial turmoil since the 1930s.

He argued at the time that there was no legal way to save Lehman so the next best thing was to let the bank fail and use the government’s financial resources to prevent wider systemic failures.

The trio’s main work focused on understanding the role of banks in the economy, particularly during financial crises and how banking failures can amplify and self-perpetuate a crisis.

“An important finding in their research is why avoiding bank collapses is vital,” the academy added. “Their analyses have been of great practical importance in regulating financial markets and dealing with financial crises.”

The Academy said that Bernanke showed with statistical analysis that bank runs led to bank failures and this was the mechanism that turned a relatively ordinary recession into the depression in the 30s, the world’s most dramatic, and, severe crisis.

Bank runs can easily become self-fulfilling leading to the collapse of an institution and putting the entire financial sector at risk.

“These dangerous dynamics can be prevented through the government providing deposit insurance and acting as a lender of last resort to banks,” the Academy said.

The trio join such luminaries as Paul Krugman and Milton Friedman, previous winners of the prize.

The majority of previous laureates have been from the United States.

The economics prize is not one of the original five awards created in the 1895 will of industrialist and dynamite inventor Alfred Nobel.

It was established by Sweden’s central bank and first awarded in 1969, its full and formal name being the Sveriges Riksbank Prize in Economic Sciences in Memory of Alfred Nobel.

(Except for the headline, this story has not been edited by NDTV staff and is published from a syndicated feed.)