Eagles coach not ruling Hurts out vs. Cowboys 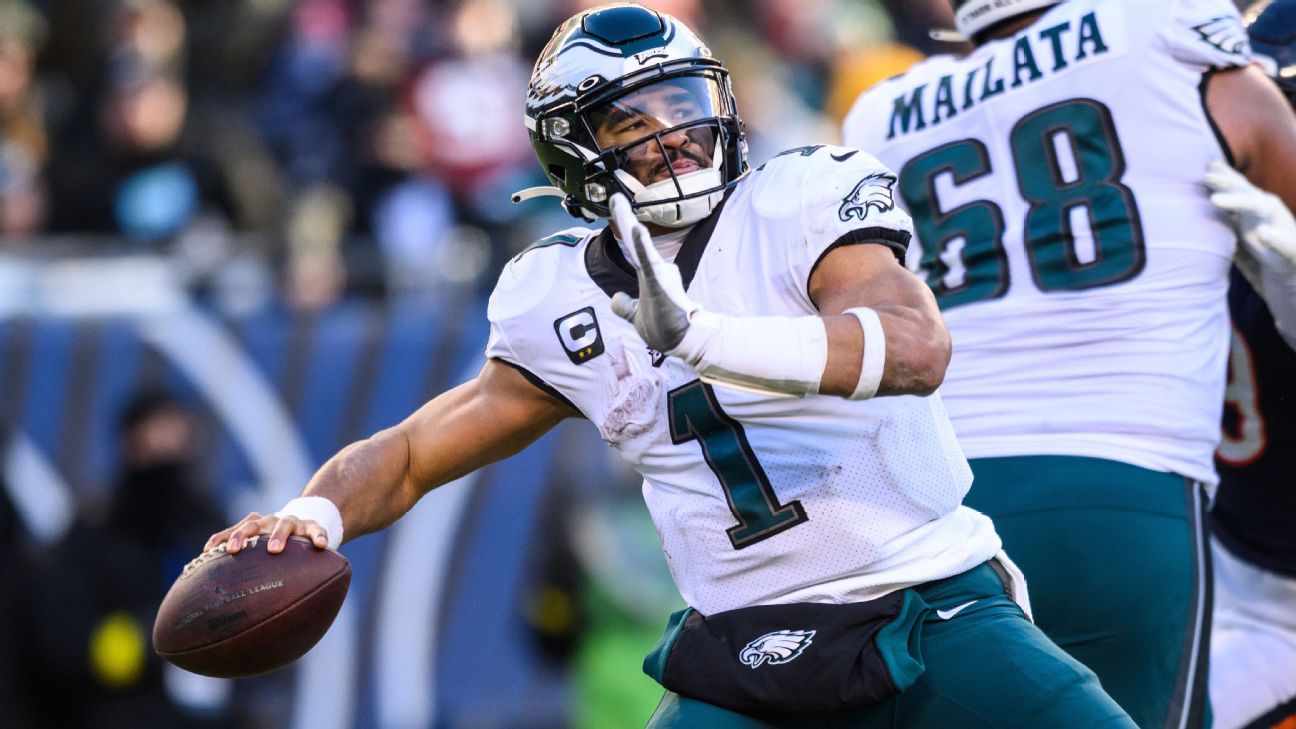 PHILADELPHIA — Eagles coach Nick Sirianni confirmed Tuesday that quarterback Jalen Hurts has a sprained right shoulder, but he isn’t ruling him out for Saturday’s game against the Dallas Cowboys.

Sirianni called Hurts one of the “toughest” players he knows and someone who “heals fast,” so he isn’t going to put a timetable on the injury to Hurts’ throwing shoulder.

“I do not put it past Jalen Hurts, I don’t put anything past Jalen Hurts as far as his physical and mental toughness,” Sirianni said Tuesday. “There’s a chance he can play this week.”

Hurts on Tuesday said there is “definitely a chance” he will be able to play Saturday and he’s taking things day by day. He nodded when asked if he’s able to throw.

The Eagles held a walk-through Tuesday as preparations for Dallas begin in earnest, but they were short on quarterbacks. Gardner Minshew spoke at former coach Mike Leach’s funeral service in Mississippi and is expected back in the Philadelphia area later Tuesday. Hurts was listed as not participating in the practice.

Asked who he would be snapping to, center Jason Kelce said “Ian Book,” the Eagles’ third-string quarterback.

Sirianni acknowledged that they will keep Hurts’ safety in mind but said the Eagles will prepare for both Hurts and Minshew to play in Saturday’s game at Dallas.

The general expectation in the locker room was that Minshew would be under center against the Cowboys. Tight end Dallas Goedert, who was activated off injured reserve Tuesday, suggested that would be the case through the majority of his comments.

“He knows his role, and he just waits for his time for an opportunity like this, and we all have faith that he’s going to make the most of it,” Goedert said.

“He’s just a smart football player. He’s going to take what the defense gives him. Maybe the Cowboys will be playing a little soft inside worrying about DeVonta [Smith] and A.J. [Brown] and hopefully they forget about me so he can just dump it to me over the middle. That’d be pretty nice.”

Still, teammates are not discounting Hurts’ willpower. He wants to play in this game, some indicated, and believe he is trying to make a push to do so.

Hurts’ injury occurred at the end of the third quarter Sunday in the Eagles’ victory over the Chicago Bears when he was driven into the ground by defensive lineman Trevis Gipson following a 3-yard run. Hurts stayed on the ground for a few moments following the hit but continued playing and finished the game. He threw for 315 yards with two interceptions and ran for 61 yards and three scores in the 25-20 victory.

Hurts ran the ball a team-high 17 times Sunday. The Bears registered 13 quarterback hits on him, the third-highest total in Week 15, per ESPN Stats & Information research. His 184 QB contacts on the season are the third most, behind only Justin Fields of the Bears (202) and Daniel Jones of the New York Giants (186).

The 13-1 Eagles need just one more win to clinch the No. 1 seed in the NFC. There’s a good chance Minshew will be the one under center against the Cowboys as the Eagles try to wrap up the division title and home-field advantage throughout the playoffs.

Hurts has had a breakout season, accounting for 35 total touchdowns (22 passing, 13 rushing) to tie Randall Cunningham’s franchise record while passing for 3,472 yards and rushing for 747 yards in 14 games. He has had just five passes intercepted and is completing 67.3% of his attempts.