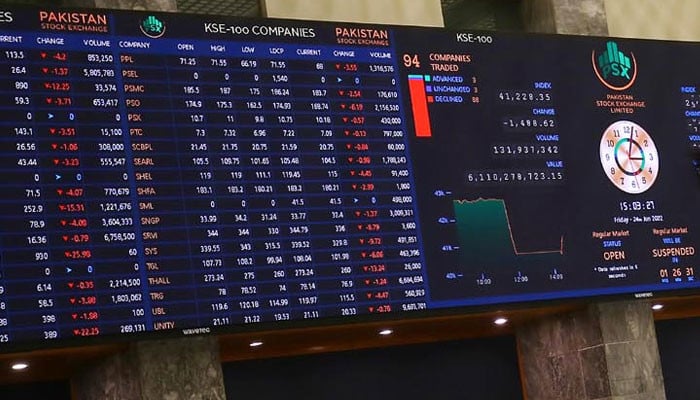 The Pakistan Stock Exchange (PSX) on Wednesday plunged to a 26-month low level after the benchmark KSE-100 index shed nearly 500 points as investors adopted a dump-and-run approach due to rising political tension in the country.

The benchmark KSE-100 index underwent selling pressure from the time trading kicked off, dipping to a low of 39,276.70 points with volumes remaining on the lower side.

Market talk suggested that the ongoing uncertainty regarding the no-confidence motion against Punjab Chief Minister Parvez Elahi is the chief reason behind investors’ dump-and-run approach at the bourse.

The index has been under immense pressure since the last week when former prime minister Imran Khan announced that the Pakistan Tehreek-e-Insaf will dissolve Punjab and Khyber Pakhtunkhwa assemblies on December 23, which was widely seen as a negative for stock market investors.

Subsequent heavy net selling by foreign investors, coupled with the constant depreciation of the rupee and delay in the International Monstery Fund programme, has led to panic selling with the index shedding close to 5% in the last three sessions.

Analysts and followers expect that the stock market is likely to remain under pressure unless clarity emerges on the political front.

Arif Habib Limited, in its post-market commentary, stated a negative session was witnessed at the PSX today.

The benchmark KSE-100 index recorded a lacklustre session as investor participation remained low due to ongoing political unrest, with the index shedding 555.75 points during intra-day in the main board. However, decent volumes were recorded in the third-tier stocks.

Shares of 329 companies were traded during the session. At the close of trading, 115 scrips closed in the green, 195 in the red, and 19 remained unchanged.

Overall trading volumes fell to 166 million shares compared with Tuesday’s tally of 265.28 million. The value of shares traded during the day was Rs4.05 billion.