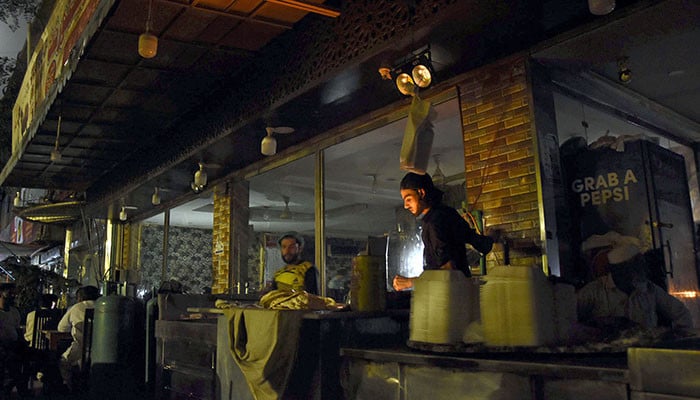 President All Pakistan Anjuman-e-Tajran President Ajmal Baloch condemned the restrictions — which are to be imposed by the Centre after consultations with the provinces. He urged the government to immediately withdraw its decision to close markets and restaurants at 8pm.

The government under its National Energy Conservation Plan has decided that the timing of wedding halls would be limited to 10pm, while restaurants, hotels, and markets would closed by 8pm.

However, it was learnt that there may be some room for the closing time for restaurants to be extended by an hour.

“The government, before defaulting the country, will bankrupt all traders,” Baloch said, adding that traders purchase the most expensive electricity from 6pm to 8pm.

Warning the government of protests across the country, he said: “The coalition government has wreaked havoc on the economy of Pakistan.”

Karachi Electric Dealers Association President Rizwan Irfan lamented that the traders are already facing difficulties due to electricity and gas load shedding. He warned that merchants would take strict actions in case these time restrictions are imposed.

He explained that if more people were dining in restaurants at night then less energy would be consumed compared to them staying indoors.

“All restaurants carry an inventory of perishable items, which is to be kept in cold storage 24 hours a day and seven days a week, another major electricity consuming machinery are air conditions which are already off due to winter season,” the letter read, adding that therefore closing restaurants early will “not help to conserve any energy.”

Recalling the economic damage suffered during COVID-19, the association — which is a registered member of the Federation of Pakistan Chambers of Commerce and Industry (FPCCI) — mentioned that almost 50% of restaurants are running in losses due to the prevailing economic situation.

“Any further restriction will further aggravate the situation resulting in huge unemployment and loss of revenue for the government,” it said, mentioning that 40 industries allied with the restaurants will also suffer due to these restrictions.

The APRA requested the authorities concerned to allow restaurants to operate dine-in till 1am and take away and delivery should be allowed 24/7.