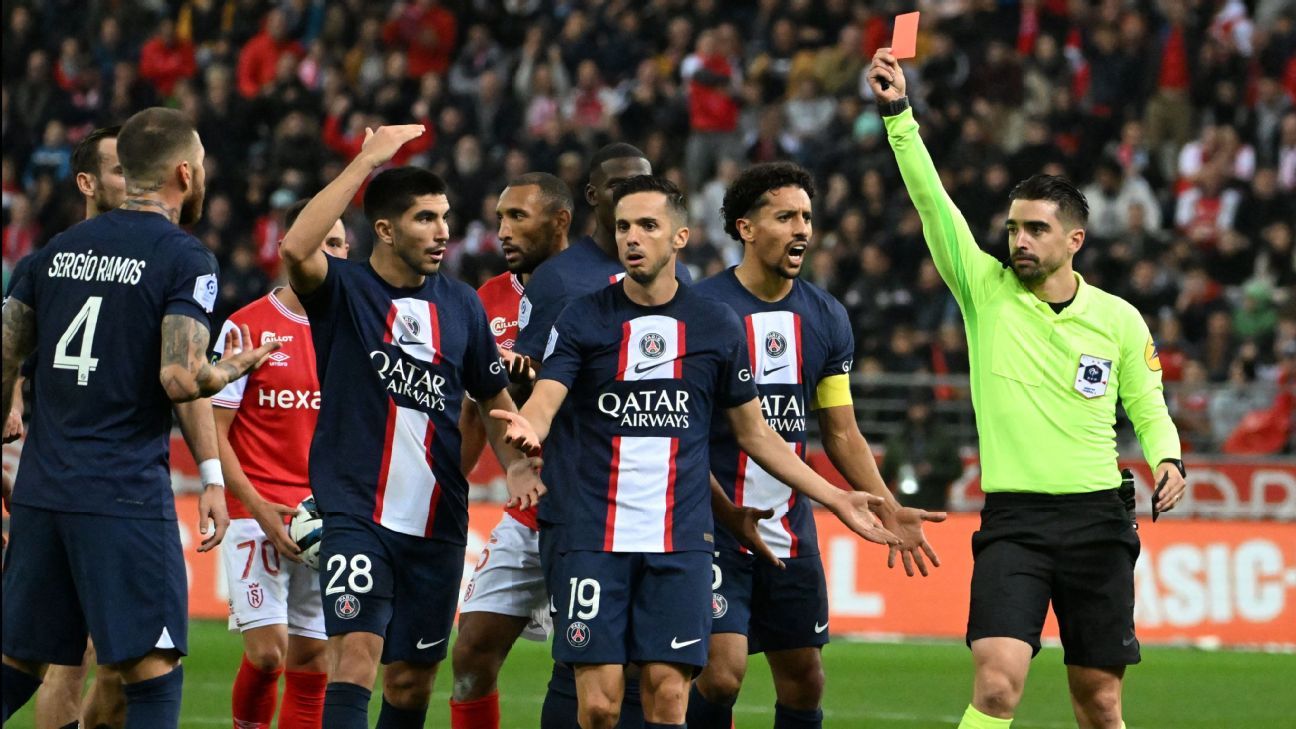 
Sergio Ramos has the all-time LaLiga record for red cards (20) while playing for Real Madrid and picked up his final one for the club (No. 26) across all competitions against Manchester City in the Champions League in February 2020.

Now at Paris Saint-Germain, the combative defender is 36 years old but hasn’t mellowed with age as he has managed two more during his time in Paris.

Here are all his red cards in all their glory.

Ramos’ first career sending off came just a month into his first season with Madrid, with two second half yellows cards seeing him leave the pitch early as Madrid lost at Espanyol.

A first straight red arrived 11 days later as Ramos reacted to a challenge from Olympiakos substitute Giannakis Okkas with the game already in added time.

A bad tempered game saw both teams end with 10 men — and Zinedine Zidane hit a late equaliser after Ramos was sent off with his side 2-0 down.

Zidane’s last game for Madrid saw Ramos shown a straight red for using a hand to block a goalbound shot, a decision the Bernabeu hierarchy managed to get overturned on appeal.

A first derbi sending off came for two bookings, the second for a foul on Fernando Torres.

Ramos’ relationship with his former club took another twist as he again picked up two yellow cards with Madrid already trailing 2-0.

A feisty game at then-high-flying Recreativo saw Ramos given his marching orders for an elbow on ex-Liverpool striker Florent Sinama-Pongolle — having already been booked for a two-footed tackle earlier — then he insulted the referee on his way off.

Another pair of bookings in a key game as Madrid led down the final straight in La Liga: a handball for the first, with the second coming for a trip on his then Spain teammate Fernando Navarro.

A straight red for stepping on the chest of Malaga left-back Eliseu, who was on the ground, with the game at 2-2 just before half-time.

A second derbi sending off, this time for a professional foul on Sergio Aguero when he was the last man, with Madrid 3-0 up at the Vicente Calderon.

A “clever” second yellow for throwing the ball away late on with Jose Mourinho’s team already through to the round of 16 and a meaningless final group game still to come, which backfired when UEFA saw what he was trying to do.

With his team already humiliated at the Camp Nou, Ramos’ scything tackle on David Villa was followed by going through Lionel Messi from behind in added time, before he tussled with Carles Puyol and Xavi Hernandez on his way to the tunnel.

A second Clasico red card was awarded for two yellows — first dissent and then an elbow on international colleague Sergio Busquets, as Madrid were eliminated from the Copa del Rey.

A chest high tackle on Nilmar, having already been booked, on a night when Mourinho was sent off for allegedly insulting the referee’s mother, and Mesut Ozil and fitness coach Rui Faria also saw red.

With Madrid already easing through to the next round, Ramos kicked out at Celta midfielder Augusto Fernandez, and picked up a five-game ban after calling the match official “shameless” for having “spent the whole game f—ing us.”

Within just 18 minutes, Ramos had headed his team 2-0 ahead and been sent off for two quick yellow cards — the second harshly awarded for handball.

Scottish referee Willie Collum saw a professional foul on Galatasaray attacker Umut Bulut with the score at 0-0, again one of the more debatable reds of his career.

Carlo Ancelotti’s Madrid lost their grip on that year’s title race in a game of three penalties and three Messi goals — one converted after Ramos was adjudged to have knocked over Neymar from behind in a professional foul with the game at 2-2.

A two year red-card drought was ended as Ramos picked up a needless second yellow for a tackle from behind on midfielder Momo.

Freshly returned from suspension, Ramos got a fourth Clasico red for an ugly foul on Luis Suarez at 1-1 late on, but Cristiano Ronaldo still had time to hit a winner.

Another straight red for a lunge at Messi, who then punished the discretion by hitting a late winner for a result which almost cost Zidane’s side the La Liga title.

La Liga’s opening day brought Ramos’ first red of 2017-18, with yet another second yellow coming with the game almost up, in an aerial challenge with Deportivo’s Borja Valle.

Playing with a mask on his broken nose, Ramos was perhaps extra eager to defend himself, and both yellows were for raising his arm when jumping for headers against Athletic’s Raul Garcia and Aritz Aduriz.

Ramos was sent off for two bookings, the first of which was earned in the 64th minute when he gave away a penalty after handling an Aleix Garcia shot. The second came in the closing moments, a high boot from Ramos deep inside the Girona penalty area brought a second yellow.

Ramos went a whole year without getting sent off, but as Man City came back from 1-0 down at the Bernabeu in the Champions League round of 16 first-leg, the defender pulled back Gabriel Jesus when he was through on goal and picked up another red late in the game. That ensured he tied Zlatan Ibrahimovic and Edgar Davids for the most red cards in UCL history with four.

In only his third appearance for the Ligue 1 club since joining in July 2021, Ramos was shown his first red card in December’s 1-1 draw at Lorient. Ramos only entered the fray as a half-time substitute and yet still failed to make it to the final whistle after picking up two late bookings in the space of just five minutes. With PSG trailing and chasing the game, they were reduced to 10 men when Ramos picked up a second caution in the 86th minute for obstructing a run made by Lorient forward Teremas Moffi. A 91st-minute equaliser from Mauro Icardi was enough to plunder a draw

Ramos picked up two yellow cards in 30 seconds to see red for the 28th time. He landed his first yellow card after arguing with referee Pierre Gaillouste in the 41st minute, who went back to the Spaniard and handed him a straight red moments later.