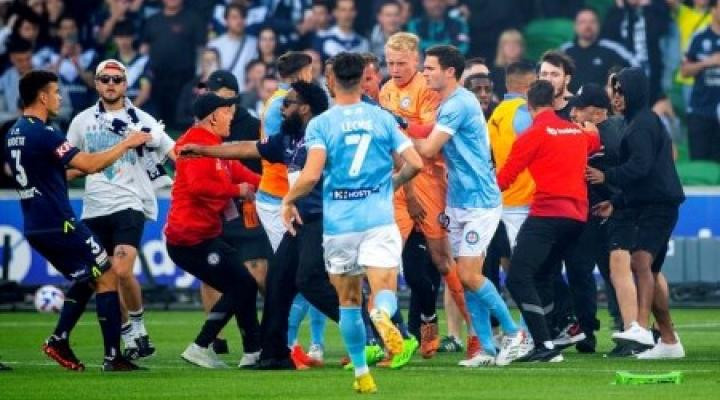 Football Australia has issued the first two of many lifetime bans it expects to hand out as part of its ongoing investigation into the pitch invasion that left a player and a referee injured during the abandoned A-League derby.

Melbourne City goalkeeper Tom Glover was concussed after being struck in the face by a metal bucket and referee Alex King suffered a cut to his head as fans from the Melbourne Victory end stormed onto the pitch on Saturday.

The pitch invasion came days after the A-League announced a deal to sell its men’s and women’s title-deciding Grand Finals to Sydney until 2025, a decision that triggered a major fan backlash.

Hosting rights for Grand Finals were previously given to the top-finishing teams.

Football Australia launched an investigation a day after the incident, saying the organisation would “weed out” the troublemakers.

A Football Australia statement on Tuesday said that the ban was handed to a spectator known as “Bucket Man” and one other patron.

“The 19-year-old man has been found guilty by Football Australia of entering the field of play without authorisation and engaging in conduct that did or was likely to cause harm or endanger others.”

The police have also subjected them to a range of charges, including violent disorder, public nuisance and riotous behaviour.