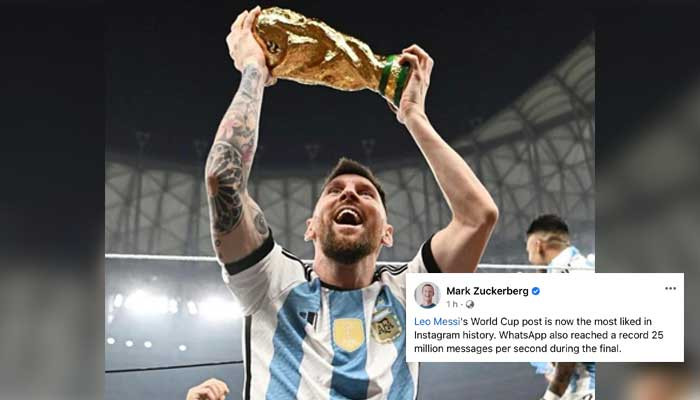 After winning one of the most-awaited sporting events of the year, star footballer and Argentina captain Lionel Messi has broken the internet with his Instagram post posing with the FIFA World Cup 2022’s coveted golden trophy.

The number of likes, shares, and comments on Messi’s post skyrocketed so much, it even made Meta’s Chief Executive Officer Mark Zuckerberg comment.

As one of the most talked-about stories in the world for the last few days, Argentina’s third World Cup win has been received well not for fans of the game in the country but by football buffs across the globe.

Messi, in his most-liked post, thanked everyone for their support in Spanish.

“WORLD CHAMPIONS!!!!!!! I dreamed it so many times, I wanted it so much that I still haven’t fallen, I can’t believe it……” he wrote

“We demonstrate once again that Argentines when we fight together and united we are capable of achieving what we set out to do,” the post further read.

France had come from two goals down to level over 90 minutes with Kylian Mbappe netting twice in two minutes, including an 80th-minute penalty.