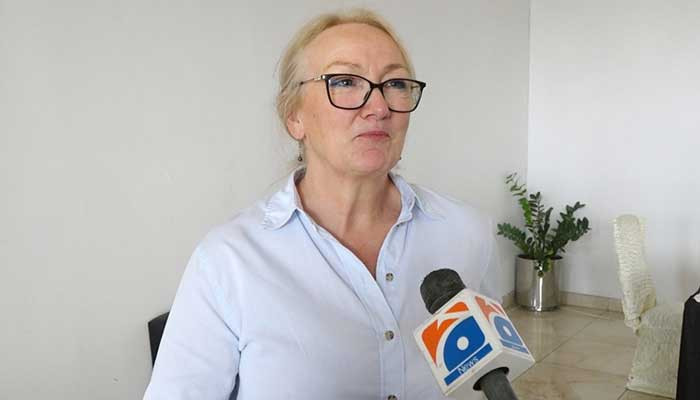 KARACHI: British Deputy High Commissioner Sarah Mooney feels that cricket can play a significant role in bringing people together and understand each other.

Mooney, while speaking to Geo News in Karachi during the third Test match between Pakistan and England, said that she is delighted to see England playing in the port city after a long time.

Commenting on England’s earlier arrival to play T20I matches in Pakistan, the deputy high commissioner said: “When they first came, the floods were very much in people’s minds. And I’m really impressed by the way the ECB, the players and the PCB, have worked together to try and help the victims of the floods, as well. I think it’s great. It’s great for all of us.”

Mooney said that there have been some outstanding Pakistan players across all the formats. “I was sad to see Rizwan go, I was hoping that he could pull out some of the forms that he’s been showing in the T20s. But you know, he’s a young man, so next time,” she said.

When asked if cricket can be a confidence-building measure to bring people together, the UK diplomat agreed and hoped that the message and love which the visitors from England have received here will spread further.

“We have representatives from the Barmy Army’s travelling fans here. They are so excited. I was talking to a lot of them over the last night and earlier today. They had a wonderful time. They’ve seen lots of Pakistan, they’ve been welcomed, people have loved it, that actually spreads out,” she added.

The diplomat added that the feeling of being welcomed in Pakistan will be taken back home with them.

“And you can bet in a couple of years time, there won’t just be a handful of Barmy Army, there’ll be hundreds and it will be brilliant,” she told Geo News.

Mooney further said that the spirit in which these matches are played is great. “The excitement that the spectators have and the welcome, which the cricket team has had, has been brilliant,” she concluded.