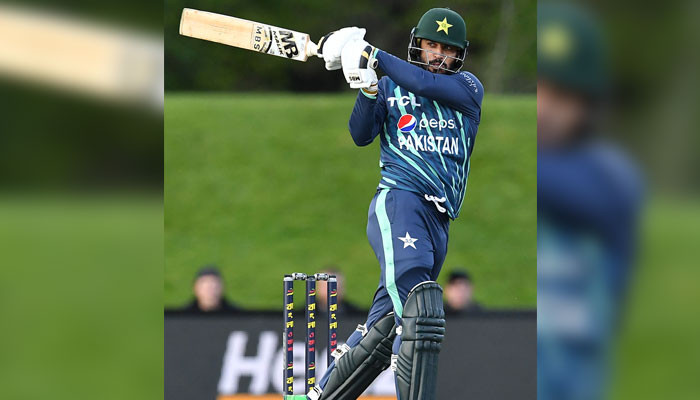 
CHRISTCHURCH: Pakistan tuned up for the tri-series final against hosts New Zealand with a nerve-wracking seven-wicket win over Bangladesh on Thursday after Mohammad Nawaz secured victory with just a ball to spare.

Litton Das, who brushed off an early leg strain to put in a gutsy performance, and captain Shakib Al Hasan both chalked up half-centuries for Bangladesh to set Pakistan 174 to win in Christchurch.

In reply, Pakistan had to work for the win as allrounder Nawaz put in a match-changing innings of 45 off 20 balls.

With his side needing eight runs from the final over, Nawaz delivered by grabbing three doubles, then sealed the victory with a four squeezed between point and short third-man.

Pakistan face hosts New Zealand in Friday´s final while Bangladesh finish on four straight defeats in the tri-series, a warm-up event ahead of the Twenty20 World Cup in Australia.

Pakistan´s Mohammad Rizwan was the man of the match, but he immediately paid tribute to Nawaz.

“I´d like to credit Mohammad Nawaz as he made it easy in the end,” said Rizwan, top-scorer with 69 runs off 56 balls.

“Obviously, the win gives us confidence, but New Zealand is playing at home.”

While his opening partner Najmul Hossain Shanto and Soumya Sarkar were both caught early on, Das dug in with a superb 69 off 42 balls, firing six fours and two sixes around Hagley Oval.

After Das was finally caught by Mohammad Wasim, Shakib Al Hasan kept the scoreboard ticking over with 68 runs off 42 balls.

In reply, Pakistan openers Rizwan and Babar Azam put on a partnership of 101.

After reaching 55 runs off 40 balls, Azam was finally caught in the 12th over. Then Haider Ali immediately went for a duck, clean bowled by Hasan Mahmud.

But Nawaz wrestled the match away from Bangladesh with a stunning four, then a six and another four off three consecutive balls in the 15th over.

Bangladesh took the game to the wire when Rizwan was finally caught at deep cover.

However, Nawaz kept his cool to see Pakistan home.