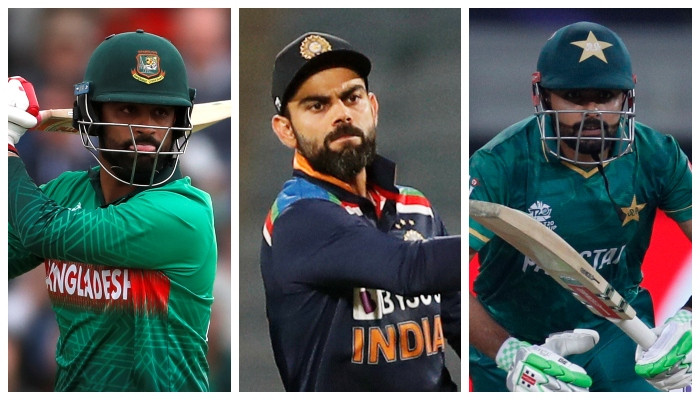 
Every edition of the T20 World Cup is graced by batting brilliance shown by some cricket greats.

Here’s a list of the highest run-getter from every edition of the T20 World Cup:

The Australian batter wreaked havoc in the inaugural edition of the tournament in South Africa, tonking the most boundaries (32 fours and 10 sixes) while amassing 265 runs in six matches.

Hayden had made a habit of remaining unbeaten in run-chases in the tournament, this time dominating Bangladesh with a 73* off 48 balls followed by a 58* off 38 balls against Sri Lanka that steered Australia to a semi-final match against India.

Sri Lanka cricketer was the pick of the batters in the tournament as he also clinched the Player of the Tournament award.

T20 cricket, often made exciting with big shots and massive sixes, was overpowered by Dilshan’s prowess of finding gaps and ‘Dil-scooping’ the ball in an audacious manner as he found the boundary 50 times, 18 more than the second-most (Jacques Kallis).

Undefeated through the group stage, Sri Lanka were riding high on momentum as they arrived in the semi-final when Dilshan’s 96 not out off 57 balls helped them book a berth in the final against Pakistan.

An experienced campaigner in Sri Lanka’s ranks, Jayawardena announced his arrival with a bang in their opening match, smashing 81 off 51 balls against New Zealand. However, his effort went in vain with New Zealand winning by two wickets.

After that, the opening batter went on to score Sri Lanka’s first and only century of the T20 World Cup, a 100 off 64 deliveries against Zimbabwe. Then, he completed a hat-trick of fifty-plus scores when he came ever so close to scoring another hundred, falling short by two runs against West Indies.

The 2012 edition of T20 World Cup saw Watson at his destructive best as he was crowned the Player of the Tournament.

Despite a heavy workload with the ball, his performance with the bat remained unhindered. The all-rounder, while opening the batting, registered 249 runs at 49.80 and a strike rate of 150, including three fifties.

However, his efforts could only assist Australia in getting to the semifinals, where they lost to eventual champions West Indies.

During the tournament’s 2014 edition, India’s batting great Virat Kohli was at his magnificent best. Kohli proved a formidable force against which the opposition had no answers.

In just six games, Kohli racked up 319 runs that included four half-centuries. His runs were completed at an astounding average of 106.33 and a steady strike rate of 129.14.

The Bangladesh southpaw had a tournament to remember that established him as a dangerous white-ball batter. Fireworks from his blade ensured Bangladesh’s qualification to the Super 10 stage of the tournament.

Class, consistency and candescence. Whenever Babar walked out to bat, the audience was captivated by his elegant drives and ability to switch between gears.

Azam scored a crucial half-century in Pakistan’s first win over India in the T20 World Cup with an unbeaten partnership of 152 with Mohammad Rizwan.

The opener went on to score three more fifties before Pakistan were knocked out by Australia in the semi-final in a thrilling contest.

Babar shares the record of scoring the most half-centuries (four) in a single edition of the tournament with Virat Kohli (2014) and Hayden (2007).