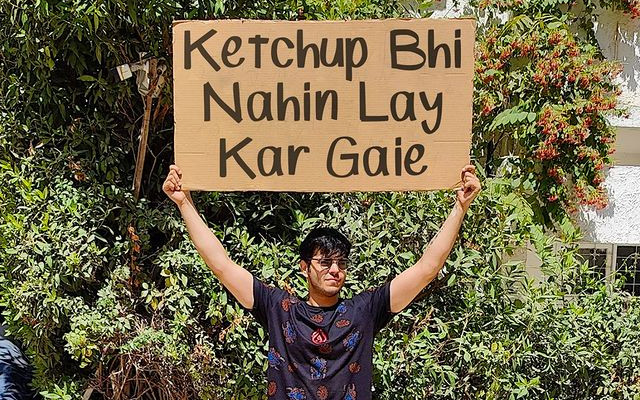 
Ongoing television serial Habs has Twitter discussing the significance of ketchup as the show serves a slice of love with a side of loyalty.

The serial starring Feroze Khan, Ayesha Omar, and Ushna Shah picked viewers’ interest in June for the striking chemistry between Ushna and Feroze’s characters, Ayesha and Basit. Now, it has prompted many to ship another love boat, this time carrying Aamir, played by Hamzah Tariq Jamil and Zoya, played by newcomer Janice Tessa.

The young couple has always been a fan favourite but a scene from a recent episode of the show involving a riled-up Zoya leaving the dinner table with a few slices of pizza and sadly, no ketchup, has everyone in fits. It sees Zoya’s husband Aamir lashing out at his parents for mistreating the love of his life and while doing so, rightfully pointing out an important detail. “Ketchup bhi nahi leke gayi woh!” He then demands to know, “aap logo ko ho kya gaya hai?”

Ketchup is important, after all. And many have since been discussing the same on Twitter while contemplating the perks of having a husband who actually cares about his wife’s meals and peace of mind. It goes without saying the scene has prompted a barrage of memes, too, and we are getting behind all of them.

“Woh naraz hokar gayi ye important nahi hai, woh ketchup nahi lekar gayi ye important hai,” shared a user in a meme driven from Mirzapur. “Guys if he is not worried about your ketchup…” pointed out another with red flags. “A man who doesn’t bring ketchup for you isn’t loyal,” tweeted one more.

Guys if he is not worried about your ketchup…
🚩🚩🚩🚩🚩

It’s 2022 and girls officially don’t care about empty promises that sound poetic. “In the world full of ‘mai tumhare liye chand taare tor laon ga’ be my ‘ketchup bhi ni le kr gyi wo,’” wrote a tweep. A user even compared the scene to the iconic Baghban moment, “Rula diya na bechari ko,” while deeming the ketchup affair to be superior.

Many have even crowned Jamil’s character the ‘ideal husband’. “If Amir isn’t Husband goals, I wonder who is,” tweeted a fan. Another shared a crying SRK photo to write, “Zoya’s husband watching her struggling with dry pizza.” Of course, a You moment made it to the Twitter frenzy – “I ketchup you,” it is.

Thank you, Habs, for pointing out what really matters – a caring husband and ketchup. And on that note, it is pertinent to mention here that Zoya eventually got her ketchup. All is right in the world. Twitter can rest now.

Have something to add to the story? Share it in the comments below.