Julia Roberts: Being an actor is 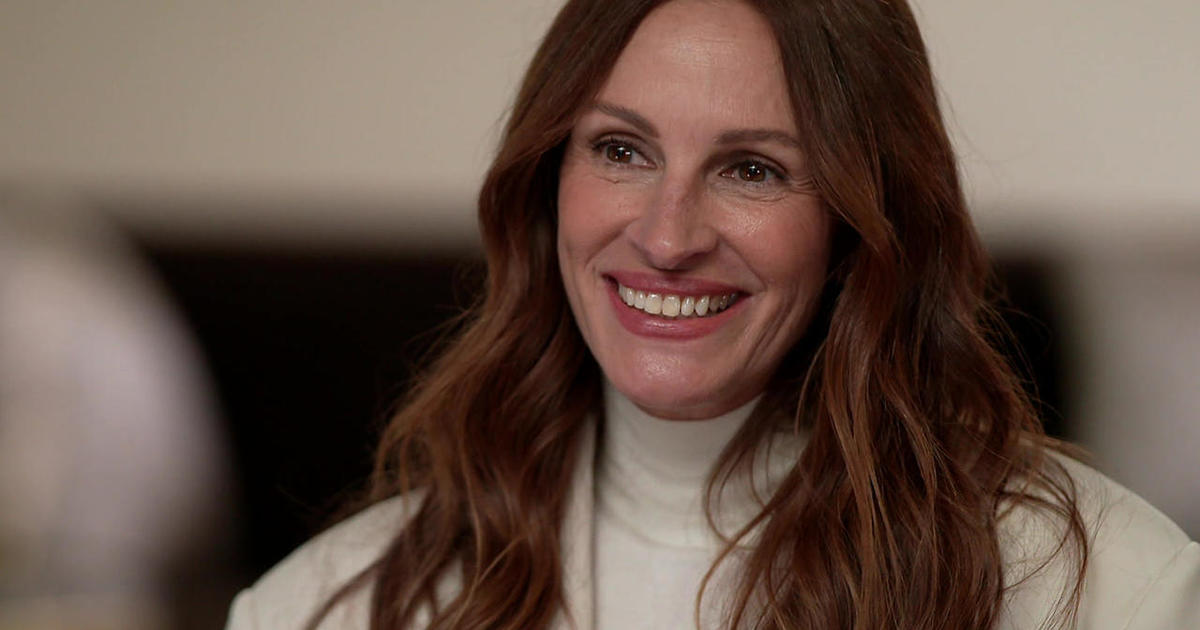 
Julia Roberts at 54 is a beautiful woman. She was People magazine’s “Most Beautiful Woman in the World” a record five times. But at Smyrna, Ga., Campbell High School? Not even a runner-up.

After graduation, in 1985, she followed her sister, Lisa, an aspiring actor, to New York City; their older brother, Eric Roberts, was already established. But acting wasn’t her plan; she sold running shoes.

“I was a quick lacer. I was really good at lacing!” Roberts told “Sunday Morning” anchor Jane Pauley.

“And yet, what happened?”

“Well, I was walking down the street – this is the truth …”

“This story begins with, “I was walking down the street?” asked Pauley.

” … with my brother and his then-girlfriend, and passed someone that they knew. And that person was a talent agent.”

No more selling shoes! Julia Roberts was waiting tables in ”Mystic Pizza,” a low-budget film that’s become a cult classic; and was the newcomer in the stellar cast of “Steel Magnolias.”

But 1990 was a different story. An unlikely story made Roberts, who’s never had an acting class, a star, after getting the part of a drug-addicted prostitute who has a relationship with a very rich man. “The end of the movie was him stopping the car, opening the passenger door, basically pushing her out into the street, and driving away,” Roberts said.

“Good on you for getting that part!”

Pretty grim stuff! And then, the studio went bust. “I think over the course of a weekend, I didn’t have a job. And then about a week later, they said, ‘Oh, the script was sold to Disney.'”

And with Garry Marshall, known for family fare (“The Odd Couple,” “Happy Days”), directing. He didn’t see Roberts in the part, but as a courtesy he did see her.

It was a perfect fit, is what “Pretty Woman” was. And the dress is one of the most iconic in films.

In 2001, Roberts won the best actress Academy Award for “Erin Brockovich” – and might have won for best dress, too, wearing a vintage Valentino. “It was a beautiful dress that I tried on the Saturday before the Sunday of the Oscars for the first time,” Roberts said. “We didn’t do anything to it; it fit perfectly.”

And she put it away… “My daughter was digging through the closet looking for possible prom dresses last spring, was, like, ‘What’s this dress?’ I said, ‘Well, try it on.’ It was too big for her, but she looked so lovely.”

“Your daughter didn’t know that that was her mother’s Oscar [dress]?” Pauley asked.

Roberts has three children with her husband of 20 years, Daniel Moder. “I always think that they all look like me, and then Danny comes home from work, and I go, ‘Oh, you, that’s who they look like.'”

Moder is a cinematographer whose film was premiering at Cannes last year; he took their daughter. “She is a one-of-a-kind, that girl,” said Roberts. “We were Facetiming actually right before they went out. And she was lying on the bed, and I said, ‘What time is it? What are you guys doing?’ She goes, ‘Oh, Dad’s, you know, just putting his tie on. We’re getting ready to go.’ And I said, ‘Oh, are you ready?’ ‘Yeah.’ Like, she didn’t really look ready to me, you know, ponytail? And I was, like, ‘Hmm, little eyeliner?’ She was, like, ‘I didn’t bring eyeliner, Mom, what are you talkin’ about?’ It’s, like, ‘Okay, yeah.’ I mean, what eyeliner? (LAUGHS) I mean, who needs eyeliner? Just Cannes! I mean, it’s just sweet, just the innocence. She’s just with her dad. It’s not about anything else.”

The couple first met on the set of “The Mexican.” Brad Pitt was her costar.

Pauley said, “I was watching knowing that you might at that time been crushing on one of the guys behind the camera.”

“I think he and Brad were crushing on each other,” Roberts said. “I felt like I was constantly interrupting their conversations. They would sit there and they’d be talking about music. And I’d be, like, ‘Oh, I like that song!'”

Today, she said, her career and family are both important, but not equally so. “It’s just never consumed me, being an actor,” said Roberts. “It is my dream come true. But it is not my only dream come true.”

“What are the other dreams?” asked Pauley.

For the first time in 20 years, she’s starring in a romantic comedy, next week, reunited with longtime friend. George Clooney.

WEB EXCLUSIVE VIDEO: Julia Roberts on George Clooney: “I love being his foil”

“Ticket to Paradise” was shot on location in Australia. It was the longest she’d ever been away from her family. “Sixty-two days,” Roberts said. “I wrote a lot of letters.”

“You could probably have sent emails pretty quickly?” said Pauley.

“Yeah, but that’s kinda boring, and they don’t get the cool stamps,” Roberts replied. “And it’s something Danny and I have always done. The first letter he ever wrote me, which was seven pages long, I still have it tucked away. One day I’ll show it to Hazel and say, ‘That’s what you’re looking for.'”

Adept in domestic arts, Roberts learned how to knit on a movie set 30 years ago.  “We called it our lonely meters: ‘How lonely were you last night?’ And we’d, like, pull out this much knitting. ‘Look how lonely I was!'” she laughed. “And yeah, so I have been knitting ever since.”

Pauley showed Roberts an example of her own knitting. “Ooh, you’ve got a little tight stitch here,” said Roberts. “That’s how people are gonna talk about you – ‘Do you know what a tight knitter Jane Pauley is?'”

Pauley asked, “You describe yourself as a homemaker.”

“When I’m not working, that is my full-time job.  And it isn’t, you know, rainbows and kittens every day, but it does bring me a lot of joy.”

“And do you do breakfast before school?”

“And am I right in thinking that Jane Pauley might be standing in the way of you getting home to your family? Because you’ve gotta get home, I presume, for breakfast in the morning for Henry?”

To watch a trailer for “Ticket to Paradise” click on the video player below: