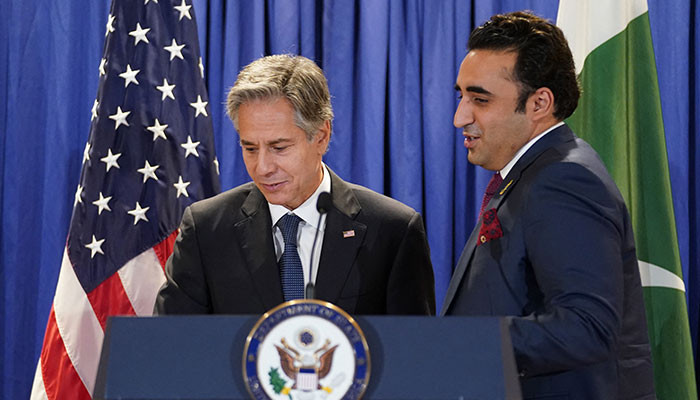 WASHINGTON: Foreign Minister Bilawal Bhutto-Zardari spoke to US Secretary of State Antony Blinken on Tuesday and discussed the need for close coordination between the two countries.

In a statement issued by the State Department’s spokesperson, the secretary expressed his continued support for the people of Pakistan as they recover from the recent devastating floods.

Both leaders shared their mutual hope for a productive international Conference on Climate Resilient Pakistan in January and discussed “the need for close coordination.”

“The secretary offered condolences for lives lost in recent terrorist attacks and underscored the United States’ resolute support for Pakistan as its combats terrorism,” the statement concluded.

The foreign minister is in Washington and has met with various American lawmakers as well as a section of the Pakistani diaspora.

During a press briefing, State Department Spokesperson Ned Price said that the department has been following reports that militants have seized control of the counterterrorism centre in Bannu and offered deepest sympathies to those injured.

The spokesperson urged those responsible for the attack to cease all acts of violence, to safely release those who remain hostage, and to end the seizure of the counterterrorism centre.

“We have partnered with our Pakistani friends to take on — to help them take on this challenge. We stand ready to assist, whether with this unfolding situation or more broadly,” the spokesperson said.

The spokesperson further said that there were terrorist groups present in Afghanistan, in the Afghan-Pakistan border region that present a clear threat not only to Pakistan but potentially to countries and people beyond.

“We are in regular dialogue with our Pakistani partners. We are prepared to help with taking on the threats they face,” the spokesperson said.

Responding to a question about FM Bilawal’s statement on Indian Prime Minister Narendra Modi, the spokesperson said that the US relationship with India and Pakistan stand on their own — and it’s not zero-sum.

“We see the importance — the indispensability really — of maintaining valuable partnerships with both our Indian and our Pakistani friends. Each of these relationships is — we don’t view them in relation to the other.”

“Each of these relationships also happens to be multifaceted,” the spokesperson said, adding, “so even as we deepen our global strategic partnership with India, we are also — we also have a relationship in which we can be candid and frank with one another.

“Where we have disagreements or concerns, we voice those just as we would with our Pakistani friends as well.”

In an interview earlier on MSNBC, FM Bilawal said that Pakistan and the United States relations are being reshaped, with an emphasis on creating economic opportunities.

The foreign minister said with consistent engagement at high levels and bilateral exchanges, the relations between Islamabad and Washington are moving ahead positively.

He said the nations could build a sustainable long-term partnership, which is in the interest of the people of both countries.

FM Bilawal said in the past, 90% of the conversation between the two countries used to be on terrorism. However, currently, “90% of the discussion takes place on economic cooperation and other areas, including terrorism”.

“This is a positive sign for Pakistan-US relations. We can’t change what happened in the past. We can learn from the past and engage with each other with realistic expectations,” the foreign minister remarked.

Regarding climate change and recent floods in Pakistan, he said the country has started to prepare National Adaptation Plan for building resilience to climate change.

The foreign minister said to become a climate-resilient country, Pakistan needs to invest in energy transition, which requires international support.

Counting on the losses caused by recent floods that have washed away 10% of Pakistan’s GDP, he stressed that adaptation is needed in a manner that if we face such catastrophe in future, we should be in a better position to cope with it.