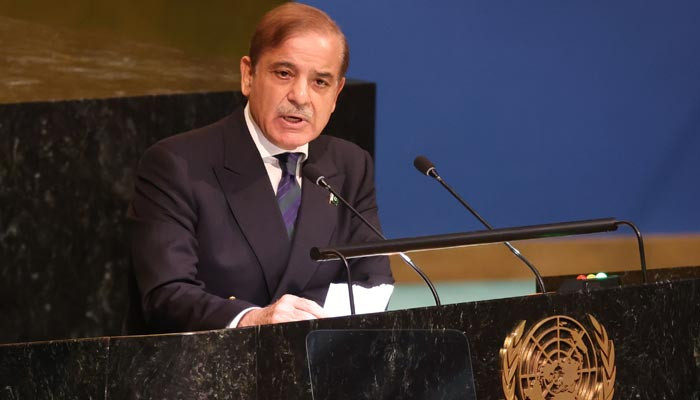 
ISLAMABAD: Prime Minister Shehbaz Sharif Saturday expressed relief that “Imran Khan-ruined economy” is coming back on track as the Pakistani rupee — which was on the cusp of hitting a new all-time-low low a few days ago — became the world’s best-performing currency in the week ended on Friday.

The rupee made the largest gain of 3.9% over five working days to Rs219.92 against the dollar on the expectation of significant foreign currency inflows.

“Finance Minister Ishaq Dar’s hard work is paying off, [PTI chief] Imran Khan-ruined economy is coming back on track,” the premier wrote on Twitter mentioning that the local currency gained 3.9% in one week to close at Rs219.92 against the greenback.

Friday was the 11th consecutive working day for the rupee when it maintained the winning streak since Dar announced his return to Pakistan by ending a five-year self-exile last month.

Apparently, after taking over, Dar resumed his old policy of protecting the rupee against the onslaught of the US dollar.

He found the rupee undervalued at July 28’s all-time low of nearly 240 to a dollar and suspected the manipulation of the rupee value by commercial banks to serve vested interests. A probe in this regard is underway.

Before Dar’s return, the rupee lost almost 12% (or Rs25) in 15 successive working days to an all-time low of around Rs240 in late July on the increased risk of default on debt repayment, for instance, in the case of $1 billion Sukuk maturing on December 5, 2022.

Dar also partially blamed his predecessor Miftah Ismail’s policies for the mess in the domestic economy.

Miftah, however, had been praised earlier for taking tough decisions to steer Pakistan away from the risk of default and persuade the International Monetary Fund (IMF) to resume its loan programme.

However, speculation is rife that the rupee will resume its downturn in the backdrop of the strengthening US dollar against many major world currencies, bouncing back of global crude oil prices to above $90 per barrel, fears of a recession in Europe, drop in Pakistan’s foreign currency reserves and no significant increase in the country’s exports.

Earlier, the domestic currency remained highly volatile since March this year as it somersaulted from the world’s best-performing currency to becoming the worst and again became the best-performing in the past seven days.