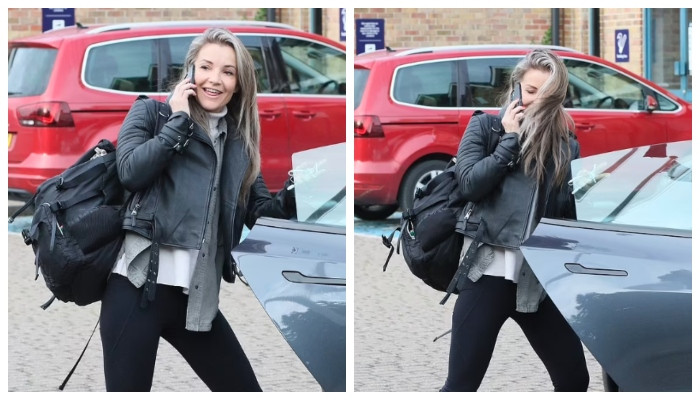 
Beaming Helen Skelton appeared in high spirits as she stepped out for Strictly Come Dancing rehearsals bright and early on Friday morning.

For the day out, Helen wore a stylish leather jacket and black exercise leggings as she left her hotel alongside co-stars Kym Marsh and Molly Rainford.

Helen completed her gorgeous look with a grey shirt, white top and stylish Veja trainers as she chatted on the phone and beamed away.

She had a big smile on her face, but yesterday, Helen was pictured breaking down as it was revealed her ex-husband Richie Myler is having a baby with new girlfriend Stephanie Thirkill – just six months after he left the family home.

Also heading to Strictly rehearsals on Friday was actress and singer Kym, 46, who looked cosy in a black and white patterned tracksuit.

Helen, with who she shares three children with ex Richie, who is currently appearing on Strictly Come Dancing, was reportedly told of the baby news before Stephanie, 32, announced it on social media.

The news of the pregnancy comes just six months after Helen announced Richie, 32, with whom she shares three children, had left the family home.