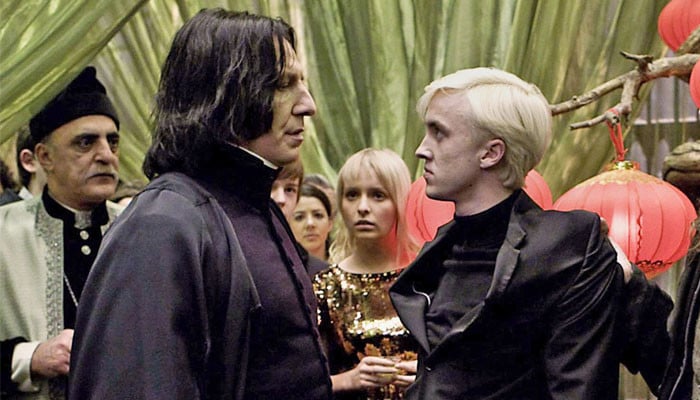 
Tom Felton remembered Alan Rickman, his late cast mate from the Harry Potter series, ahead of his upcoming memoir.

In a video posted on Instagram to promote his  memoir, Beyond the Wand: The Magic and Mayhem of Growing Up a Wizard, Felton recalled Rickman channelling his iconic Severus Snape vibe after Felton accidentally stepped on Rickman’s long black cloak on the set of one of the Harry Potter movies.

“Eventually, I was told in no uncertain terms by Alan Rickman, ‘Don’t step on my f—— cloak’,” Felton said. “[I] sort of giggled. Death Eaters and I looked at each other and thought, ‘Is he joking?’ It quickly became apparent: he’s totally not joking.”

“The next take, the director was very keen for me to walk as close as I can to Alan,” Felton continued. “We got about halfway through the Great Hall before [mimes stepping on Rickman’s cloak]. You have to bear in mind his cloak’s attached around his neck – I nearly killed the poor man! He turned around and gave me a look you never, ever want to see.”

Tom went on to add that in the next take, “luckily someone else” stepped on Rickman’s cloak which “kind of took the heat away from” him. “But I’ll never forget those words, ‘Don’t step on my f—— cloak’.”

Back in 2021, Felton, who portrayed Draco Malfoy in the series, complimented his late cast mate when a fan asked about his experience working with Rickman. The actor, 33, shared that “he was the only actor I knew and [he was] terrifying in the most pleasant way.” He also added that it was “a real privilege” to work with Rickman who was “very, very kind” and had a “wicked sense of humour.”.

Felton’s memoir, Beyond the Wand: The Magic and Mayhem of Growing Up a Wizard, releases on October 13, 2022.