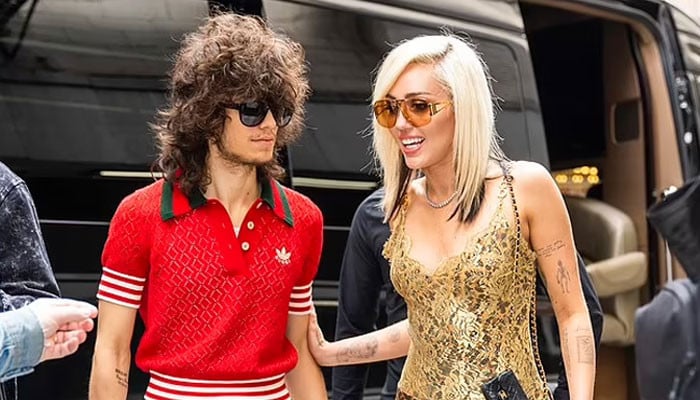 
Miley Cyrus, 29, and Maxx Morando, 23, have been dating close to an year and the duo is still going strong, insider reveals to HollywoodLife.

“Miley and Maxx are about to celebrate their one-year anniversary and she could not be happier,” a source told HollywoodLife. “She has had her fair share of relationship problems and she believes that the reason was that all her past romances were in the spotlight.”

“Miley and Maxx do not like being tabloid fodder,” the source continued. “They prefer keeping their relationship intimate and private and this is why it has lasted. They are very serious and committed to each other. She feels they are soul partners. He is like no other partner she’s ever had. He is androgynous in style and they both have so much influence on each other’s personal style – in clothes, music, and art. He is romantic and sweet, yet edgy and unpredictable.”

“Most importantly, Maxx makes Miley laugh and that is the key to any solid relationship is laughter,” the insider added. “He doesn’t allow her to take herself too seriously and brings her down to the ground. Tish [Miley’s mother] loves Maxx, as does the rest of her family.”

Miley and Maxx started dating in late 2021 after meeting through mutual friends. The drummer was then spotted supporting the Hannah Montana alum in Miami while she hosted Miley’s New Year’s Eve Party for NBC, and the pair has been inseparable ever since.

Just a couple of months into dating, Miley and Maxx were spotted kissing on a balcony in Miami, FL. A source had revealed the couple had gone serious right after.

“When Miley kissed Maxx on the balcony, she knew that she was going public with their romance,” the source close to Miley revealed. “And she does not care, at all. She is so into him and she’s calling him her boyfriend!”